Why we all need Obama’s anger management translator

At the annual nerd-prom otherwise known as the White House Correspondents Dinner held last month, the traditional speech by the US President had a supporting cast: an 'anger translator'. At the annual nerd-prom—otherwise known as the White House Correspondents Dinner—held in 2015, the traditional speech by the US President had a supporting cast: an ‘anger translator’.

While Obama spoke in measured terms about the value of the press, his ‘anger translator’ Luther (otherwise known as comedian Keegan-Michael Key) stood behind and let rip with what Obama was really thinking, shredding Fox News, CNN and fellow politicians alike.

Couldn’t we all do with one of these anger translators? While we’re waiting at the check-out for the shop assistant who is casually chatting to her friend instead of serving you, or walking past the dog owner ignoring their pooch fouling the grass, wouldn’t it be such a release to deliver a well-judged tirade that hits the spot? In the same way at work, when we’re faced with a team member who doesn’t seem to care, or a colleague who is unhelpful, it can be tempting to deliver a sharp salvo letting them know exactly what we think. It may not be the most effective way of dealing with the situation, but the release can feel very satisfying.

Watching Obama’s speech shows another side to this, though. Simply observing our anger outside ourselves, as if we were an interested onlooker, helps us to feel differently about it. It distances us from the initial intense emotion and allows us to assess the situation more objectively. It can even allow room for humor (much appreciated by the press corps attending the dinner).

This distance can be the smallest separation, a sliver of gold leaf between you and the issue, but it’s all the brain needs to make the difference between a knee jerk reaction on one hand and a deliberate response on the other. That moment of observation may be wafer thin, but it’s crucial to how we respond.

Of course, observing your anger doesn’t always mean becoming cool, calm and collected. You might still let rip. If it’s your deliberate choice, however, that’s different. There are times in life when it’s important to give frustration a voice.

But when delivering a sharp or strongly worded comment is not what you would choose that the briefest pause can really help. When, in fact, it’s more effective to explain to the shop assistant that you would appreciate her attention because you are pressed for time, or to your colleague that their support makes a big difference to the team’s results. It might just achieve the behavior you want. At the very least the other person should react more helpfully. So next time you feel anger rising up, imagine you have Luther behind you. Pause for that spit second, let him vent unseen, and then choose. It just might make all the difference.

Anna Wildman is a Director at Oil in the Engine. Why we all need Obama’s anger management translator 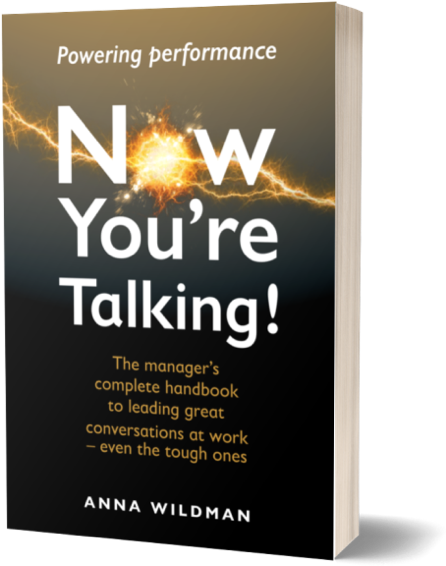 Whether through face-to-face and online learning, we build the communication skills you need.
Find out more

If the specific performance conversation you need isn’t listed here, let us know and we’ll aim to develop it

And if you can see how to improve something, that would be great to know, too!

For more information or just to have a chat with us, get in touch today.